Let us read about American Native Culture and Symbolism

Native Americans also called the American Indians or Red Indians were hunter-gatherer tribes who lived in parts of present-day Canada and the USA. The

Native Americans also called the American Indians or Red Indians were hunter-gatherer tribes who lived in parts of present-day Canada and the USA. The term “Indian” originated when Christopher Columbus landed in America thinking he had arrived in the East Indies on his way to Asia. Some groups of Native Americans were also involved in agriculture practices where most indigenous tribes followed the culture of hunting and gathering. The culture is based primarily on Animism which is a religion based upon the idea that all natural objects and phenomena have souls or spirits who are worshiped.

A culture is a group of people, who characterize themselves based on common beliefs, practices, and behavior. Different cultures have different kinds of traditions and symbolism. Symbols in Native American culture have a major significance that constitutes a story, legend, or myth. Often you might have come across these pictures (in the featured image) but have you ever wondered what did these mean? Ever wondered what are these called? Let us read and find out.

DREAM CATCHERS
Dream catchers are often hung in houses, cars and used in key chains, jewelry, etc. and promoted as a protective charm. However, dream catcher in Native American Culture has used a protective charm for children often made up of a wooden hoop covered in a net or web of natural fibers with feathers and beads hanging down. The original dream catchers are mostly handmade and use all-natural materials. The hoop is made by bending a red willow branch and covered with stretched sinew or cordage made from plants. The frame is then finished by wrapping it in leather. Sacred objects like feathers and beads are then hung from the loop where beads were mostly semi-precious stones. Real dream catchers are often rare to find with size as small as the width of the hand.

Several beliefs are attached to the significance of the dream catcher with a common story of the origin. It is believed to have been originated from the Ojibwa or Lakota Tribe and then passed on to other tribes through intermarriages. The legend comprises of a Spider-woman who was responsible for protecting children. When the tribe started expanding and families migrated, she made and gave these dream catchers as a parting gift to signify that she will always be there to protect the children. In other words, it was a means of mystically protecting their children and families from afar.

In Native American Culture, the night air is said to be filled with both good and bad dreams. The dream catcher was usually hung over a baby’s cradle or a kid’s bed. These sacred hoops usually protect children from nightmares. The bad dreams get entangled and caught in the net and are burnt in daylight whereas good dreams slide down the feathers and descend upon the one sleeping below. Another belief says that nightmares fall out of the web gaps and good dreams are caught in the web and passed on to the feathers and then to the sleeper. Circular hoops represent the circle of life. Beads resemble the spider (the weaver of the web) or the good dreams that couldn’t pass through and get immortalized in the form of sacred charms. Feathers of the owl were used in dream catchers for girls to instill wisdom and eagle feathers for boys to instill strength and courage in them.

Dream catchers are also believed to trap evil spirits or forces and protect from any illness as well. Now it is made of plastic and is oversized which are over-commercialized. It is a symbol of cultural appropriation which is now often misappropriated and misused by non-natives. 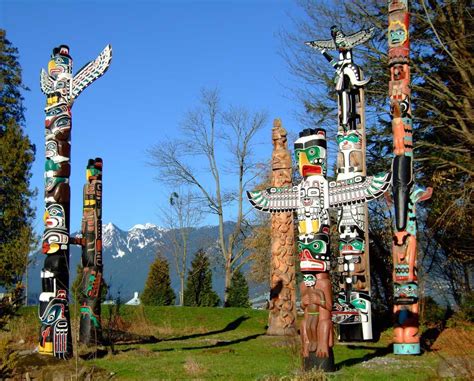 TOTEM POLES
Totem poles are sculptures usually carved onto large trees and painted with symbols and figures of animals. These represent emblems of clans or families. A totem is also believed to be a spirit being and sacred object. The emblems used comprises of humans, animals, and plants which are believed to be guardian angels that watch over the family clan. They are not worshiped but highly respected and erected in front of homes to show ancestry, social rank of family, and commemorate special events or people.

The first totem pole was erected on a Pot-latch Ceremony which had a great cultural significance. Since then the totem pole was seen as a sign of affluence and display wealth. The process of erecting and carving out a totem pole was very time consuming and involved a lot of labor and hard work it represented wealth and power. Symbols used here are usually pictographs using different colors and unique features. The combination and position of figures, color, and emblems hold a great significance that constitutes a story, legend, and myths. Spirit, when used with animals, has a combined meaning. These were widely popular in the North-Western part of America to denote Powerful Rights and Privilege. 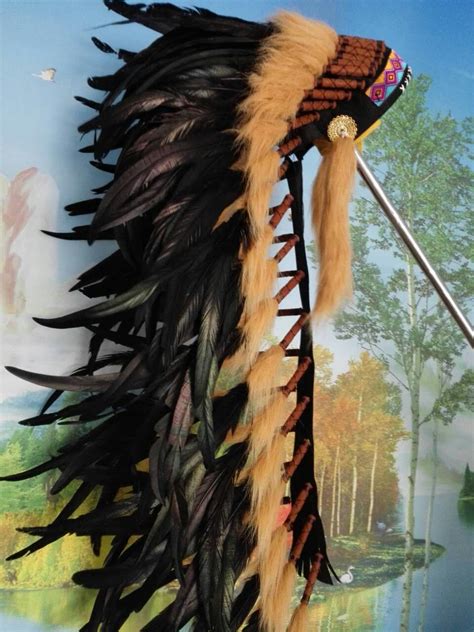 WAR BONNETS
War Bonnets were a type of headgear worn by men who were war leaders, soldiers, and chiefs. These were a symbolic reflection of brave deeds done in battles the warrior was indulged in. Traditional and authentic War Bonnets consisted of a band that had eagle feathers, ermine fur connected with some bead-work. The Chief of every tribe had a special war bonnet with a long trailer of feathers that sometimes even trailed to the floor. Different types of War Bonnets were worn by different tribes. The most common war bonnet was the  Eagle feathered War Bonnet and the most unique was the Buffalo Horn.

All types of war bonnets had feathers decorated in different styles, colors, and designs. Every single feather is an award given to the warrior for brave deeds. These war bonnets had immense significance in Native American Culture and were a great mark of respect as each feather attached had to be earned. Every feather was awarded by tribal elders for a great deed usually in warfare. Different feathers of various birds symbolized a different quality of reward. Like feathers of eagles were associated with strength and courage, falcon feathers with speed, a hawk with vision, an owl with wisdom, a raven with knowledge, a crow with skills and cunning nature, etc. The most prized feather was that of a Golden Eagle because it is believed to be a messenger of The Great Spirit in Native American Culture.

With rapid urbanization, the cultural traditions and knowledge are gradually fading but is still hold great value to those who identify with it. These are now signs and symbols of unity and cultural appropriation and this article is a small attempt to relive the old traditions and culture of history.

World’s Smartest Ever Was Born in New York 0